Haven't done a single bit of painting for well over a month now for various reasons but I have managed to get one of my 3' x 4' gaming tables constructed! 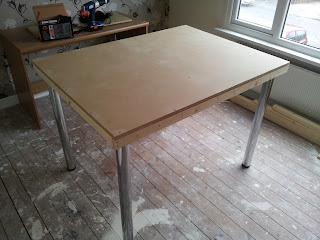 Still debating with myself wether to sand and flock it or just leave it as is and buy some kind of gaming mat. The reason for this is the variety of games I play. I'm pretty sure Star Wars X-Wing isn't a space based combat game based on a meadow in a galaxy far far away.... 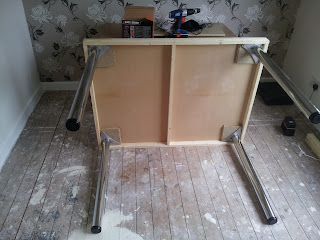 Like the tables we use at the club i've given it legs that can be removed so it can be stored elsewhere. This is the first of 2 I want to contruct as I want a 6' x 4' table. I have the wood for the other, I just need to get my finger out and get it done! I had painted the surface of the other black for the X-wing game but as stated above this was pointless! Having seen the piece of black vinyl Craig brings to club which only cost a few quid I think thats the way forward.

Onto gaming, and the club Bloodbowl league! Well, I suck at it. I played 5, won 1, drew 1 and lost 3 finishing bottom of our division, even after bribing the league commisioner for extra points due to some very dubious play in my game against Kieron (he cheated (although he'll claim he didn't)).... Still annoyed at showboating in the game against Matt as I could have won it and how I didn't win against Kieron after putting 10 of his team out of the game I'll never know! However this was my first time playing Bloodbowl in a proper league and have learnt alot!

I think the plan is that anyone that wants to carry on after the competition is finished will be put into a single division so more games can be played.

Anyway, I plan to actually paint something soon so might have a more interesting update next time!

Posted by Anomander at 04:52 No comments: