1cm of snow and the country freaks out!

Shock alert! The apathy wore off and I managed to finish my Dwarf bloodbowl team in just 2 days! Thats 12 players done and a dirty death roller.... 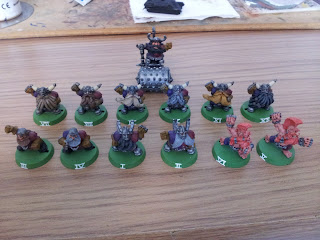 I purchased, many years ago, a blister of extra linemen to make the numbers up so these may get painted as I need them. Once I started I remebered how easy dwarfs are to paint. Drybrush armour. Paint beard. Do fiddly bits. Done! It was possibly the delivery on the Bolt Action Germans that spurred me along as well as I was determined not to paint them until the All Blocks were finished.... 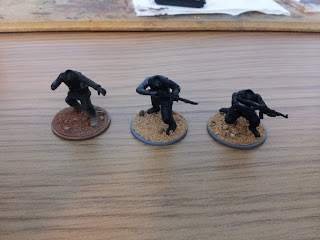 Have made a small amount of progress on my first Wermacht troops! First on left is going to be my lieutenant, the middle one is a normal guy with a Kar 98k rifle, which seems to be the standard rifle for the Germans. And the last guy, kneeling, is toting a STG44 assault rifle. The models look good, have just the right amount of detail that I won't go mad painting them, and assemble fairly easily. The arms match up with the gun you are giving them and are so well done even the trigger fingers are in the right place!

The only issue with these, and the reason I haven't done more is due to the Wargames Emporium in Sheffield being sold out of the main paint I needed! German Field Grey. Bugger! Have internet ordered it though as well as some fresh paints for doing flesh.

As a result of the delay I decided to get my Russian FOW unpainted list down a bit. First up was finishing off my air support: 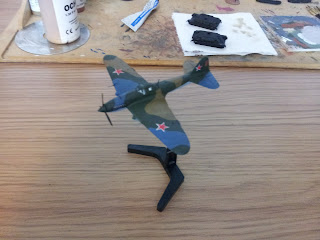 This was fully painted but I still needed to add the transfers and give it a wash. Voila! Also started to work on the last 5 T-70's I have left to do. These are a Plastic Soldier Company set and as with PSC's other sets go together really well and have crisp detailing.

Made the decision last weekend to ebay alot of my unpainted Fantasy stuff that I'm never likely to paint. Also my mini rulebook and dwarf army book. Bit sad doing this as it means I'll probably never use them again for Warhammer, or for the foreseeable future anyway with Kings of War being my preference. All in made about £140 so not bad. Will have another scan and see if theres anything else to go. Can't see the point in having the big rulebook if i'm not going to use it!

Ok, so, getting on with my to-do list then. As I knew I would, like writing an essay, I managed to mostly avoid painting my Dwarf blood bowl players. I just can't get up the motivation to do them at present! I think my anger at GW has sucked all my will to live regarding fantasy in any form....

I'm sure this situation will be rectified as we get closer to the start of the clubs league and I start to panic that my team isn't finished yet. Again, much like I do when I'm writing an essay for a work course! (It'll be fine, I've got ages! What, its due in in 2 days and I've got 4000 words to write?! S***!)

I have however completed the 2 buildings that were on my list! Hurrah! 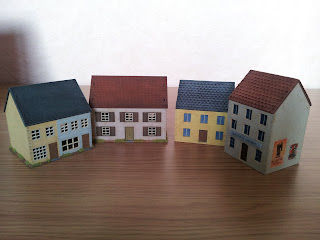 As you can see I now have the start of a small 15mm WW2 town. The new building is the second from the left. Its the farmhouse building from Sarissa Precision. Love their buildings! Go together very well and have just the right amount of detail that I don't go blind painting them. The first on the left is also Sarissa and is their small shop. The other 2 are from Warbases and are my second favourites. They go together just as well but don't have as much detail as the Sarissa ones. This and the fact the roof on them are plain and you buy different types of tiling on laser cut card, which is glued on in strips makes them just that little bit more work!

The third type I have purchased is not shown here as I have given it to Matt to see if he can do anything with it as I couldn't get along with it! Its was a 4Ground building and each floor of the building is a different layer which makes for longer contruction time. Plus the top floor being the roof, the way it goes together isn't very stable, and the roofs don't fit as well as the other 2 companies do. Also, the peg/tabs on one of the roof pieces didn't match up and i have to do some cutting, glueing and swearing to sort it out. Shame as i do like some of the detail freature of these and they have a good selection and sell pre-painted versions of each one. May still buy the church at some point. 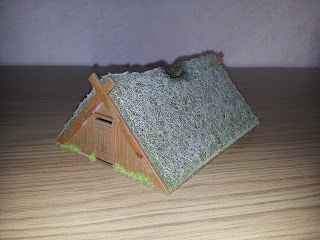 This is my Sarissa Precision Viking house! Had fun doing this one as it involved messing about cutting out scouring pads in a Blue Peter kind of way. A simple building really, easy to assemble but was only about £7. Another one of these and then one of the bigger Viking Longhouses and I'll be able to Saga at home! This will mean completing my games boards and if apathy hadn't kicked in midweek it would be well under way. I know what I need to buy, I just couldn't be arsed to go!

I have bought another black tester pot to give the space/urban board another coat and also some matt varnish to toughen it up so hopefully it won't scratch to bits the first time I use it!

As for my "not buying new stuff until the old stuff is painted" effort, I think we all know these resolutions don't last... So I've bought myself some Bolt Action German troops. £19 for 25 28mm troops is good value I think. Even if I don't find anyone to play they should be fun to assemble and paint!

Message ends.
Posted by Anomander at 07:40 No comments:

First post, yay! Can't think of anything to write, boo!

I suppose I'd better start by explaining why I've decided to start a blog. Matt made me do it. I don't normally listen to him but sat on the sofa with nothing to do its seems like a good idea. I'm not entirely sure how well or how often this will be updated but since joining Wargamers Free Company my all round gaming world seems to have become more consistent.

I put this down to a number of factors which I will now bore you with!

1. Wargamers FC is a fun group! No powergamers and free to play whatever games you want without pressure.
2 The group has a "Painted models only" philosophy which is self explanatory but means if I want to use my shiny new toy, I must paint!
3. Games workshop. I won't moan much on this subject as it gets me really angry, other than to say that they're slowly ruining the universes which I love in their pursuit of money using large chunks of unkillable plastic. This has however forced me into other gaming spheres which I now realise to be as good as, if not superior in many ways. Saga, Flames of War and X-wing being some of my most recent addictions.
4. Being a bit more sensible with any spare cash I have. I mean, that strobe light I bought was cool, but I don't know any epileptics I dislike enough to use it on.... But also not buying piles of models I will never get round to painting.

With it being a new year many at the club have written new years resolution to do lists, so i decided to do my own! I have also purchased a couple of pieces of 4' x 3' MDF so I now have my own home gaming board. This means I need to get organised and paint them up and also to sort out terrain so that every battle isn't fought on a lovely flat meadow....

Give space/urban side another coat of black.
Varnish painted side.
Sand, paint and flock one side of the other MDF piece so I at least have a home Saga board. (The other piece will be done once i've finally finished decorating the spare bedroom and have somewhere to set it up as a 6' x 4' table.)

Main priority off this list is to finish my dwarf bloodbowl team as the clubs league starts at the beginning of Feb. Its half done so once I get my head down it'll be finished fairly quickly. Thats probably why I started painting the 2 buildings the other day....

So there you go. Once I've figured out how this blog stuff works a bit better and also how my new phone works I'll start to post some photos of my stuff as I go.