Apologies for the obvious blog title but once its in your head it won't get out!

In a monumental change of tack, and even earning me a massive "F*** off!" from Kieron, I've decided to crack on and get my Carthaginians up to Basic Impetus level of completedness. I'd forgotten how nice the models are to paint, and also how sharp the spears/javelins can be...

So here is my first off the production line: 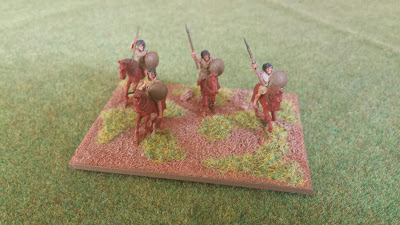 My second unit of Numidian light cavalry! I made a bit of an arse pinning the middle guy to his horse, trying to wipe off excess superglue with tissue, then trying to burn off the tissue that was stuck in the superglue and not realising that the melting point of the metal was just above butter... So he now has stump and a club foot! But hey, he doesn't need his legs when he's on a horse right?! 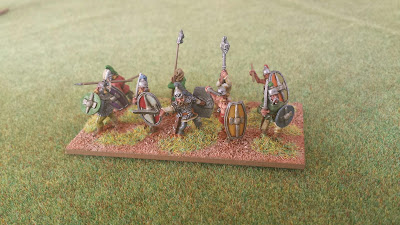 My second unit of Gallic Infantry! These are alot of fun to paint due to each model wearing different colour clothing. It does make them a bit more time consuming but the unit looks very snazzy!

Last of all this young man: 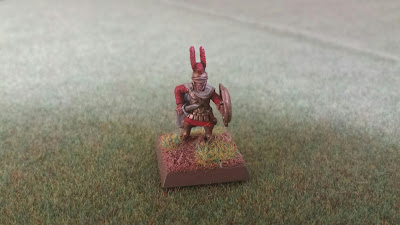 This guy will be used to represent my overall commander. I mainly did this to remind myself how I'd painted the Punic Infantry as I hadn't written it down anywhere. Managed to surprise myself with my memory!

And below is all my completed units to date:

I have another unit of Punic Infantry, some heavy cavalry and an elephant to complete. However, some extra bits are required for 2 of these units which will hopefully be purchased next weekend at Derby World.

Last but not least, and to break things up a bit, I painted these: 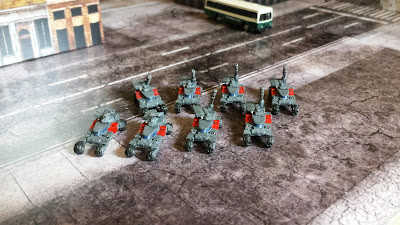 Another 4 UCM Wolverines! These are cheap, handy little buggies that can be equipped with a mixture of either missile pods for hunting armour, or extra AA, which upsets everyone no end! It also means I can field a squad of 4,6 or 8, or 2 squads of 4 depending on what mood I'm in. They are also scouts, so are good for spotting and extending sphere of influence. Lovely!
Posted by Anomander at 08:26 4 comments:

These are my new UCM dropzone toys: 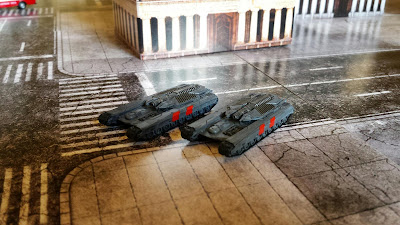 Scimitars! These are heavy tanks, 2 damage points each and an infinite range weapon, even when countermeasured! The other bonus is that any roll of 6 to hit, automatically does 2 damage to the target without having to make a damage roll! Thats enough to take out Kierons new commander in one go if I get lucky... If thats not enough a normal hit is energy 10... All I need to do now is assemble and paint another Condor dropship to deliver them in.

In other news, the new King of War rulebook is here! We've all gone for the £10 copy, which is in my opinion exactly what you want from a rulebook. Rules and armylists in a handy sized book! I wasn't originally planning on rebasing my Dwarf army, but now that the Evil Empire (GW) have completely screwed the Warhammer world up, I may just rebase them! If I can work out which box I've packed them in...
Posted by Anomander at 10:58 4 comments:

So, the others finally got around to assembling and painting enough DZC stuff that we can start to play games! Yay!

Before that though, I have managed to paint another couple of SS for my bolt action Germans. I haven't taken a picture though as I've just sat down and can't be bothered to stand up again... It does mean however that I now have enough SS painted to form 2 smallish sqauds if I so wish! I still have a few more left so hopefully will end up with 2 decent size squads eventually.

Anyway, now to the pictures! First up is this: 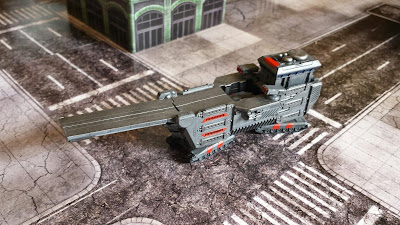 Ferrum Class Drone Base! Bought this second hand off Ebay and it had been undercoated and assembled by a moron. The 2 tracked parts at the bottom were glued in place and one was backwards so I had to sort that out. One came off easy enough but the other sheared the tab off so I had to resort to some heroic pinning to sort it out... Next time I won't be so tightfisted just to save a couple of quid!

Here it is in all its droney goodness! 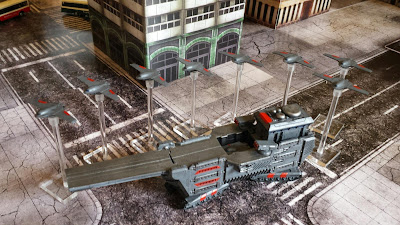 I'm looking forward to using this. The drones are fast and have an AA ability, and also can also replenish new drones from the base as they get shot down. The base itself also has a few guns! Fun times!

Next up are these: 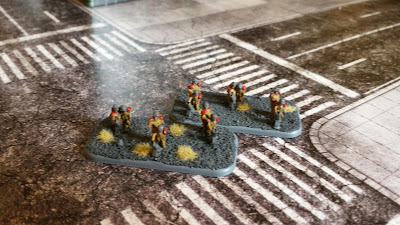 UCM Mortar Squad! More infanty that can fire 2 different types of rounds from buildings. Cheap unit and really like the models. Every unit we add at the moment seems to add something completely different to the game. The only difficulty is what to buy next! I want one of every unit as they all offer something different.

I did manage to buy another starter set off ebay for only £17, so these will be painted up as we start to play bigger games. The majority of games we have played so far are starter set only games, whilst fun, they are limited. Having played bigger games, they get a lot more fun! Plus, I haven't lost a game yet that involved more than the starter sets....
Posted by Anomander at 05:38 2 comments: