Well, for me anyway! Went from painting apathy to full steam ahead.

First up was another unit for my Carthaginian Impetus army. Love these Xyston models! Very very well sculpted but not overly deatailed so as to make them a chore to paint. Also, even if I do say so myself, they've turned out pretty well! 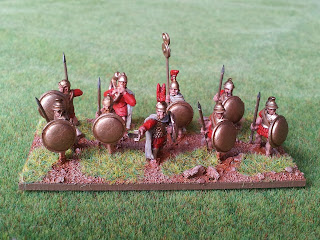 Next off the paint table are these 2: 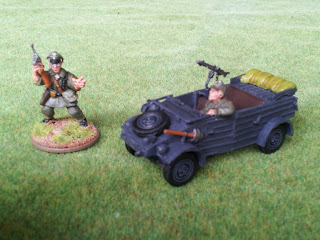 The guy on the left being the German Officer I mentioned in my last post that was painted but not photographed. The other is my Kubelwagon! Bought this to add a cheap vehicle to my army but also so that next time we play Bolt Action we can get a feel for how vehicles work in the game. Plus it gives me some added firepower with its medium machine gun.... 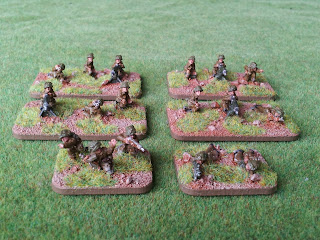 Now, for these, an explanation is needed. It's all Kierons fault.

Maybe I should expand on that! These are a British machine gun platoon which were given to me by Kieron as he'd received them for free, wasn't going to use them, and I had mentioned some plans for doing a British force at some point. As my other armies are tank based I have been wanting to do an infantry force. My worry was that I'd get bogged down painting infantry and never get to use them. These therefore were a test to see how much I enjoyed painting them as how quickly I could do them without them looking crap!

The test went well! I painted and based the whole platoon in only 2 days! Quick for me. As other have pointed out, the Battlefront infantry can be painted without too much care needed to the finer details and given a wash. The Plastic Soldier Company Russians I have on the other hand need the detail painting or they would look a bit flat and lifeless.

All in all this has resulted in me buying a command and 2 rifle platoons, which arrived in the post this morning, and also buying 3 Sherman V tanks from Matt which he has decided not to use.

Thats it for now, I just hope this painting frenzy of mine continues!