Who Watches The Watchmen?

I do! After months of pestering and sad face, Kieron finally persuaded me into the Batman Miniature Game!

It didn't take much persuading to be fair. I just baulked a bit at the rulebook price! I stopped being a tight wad however and just bought it! The free Alfred model will be made use of when I start the inevitable Batman gang... 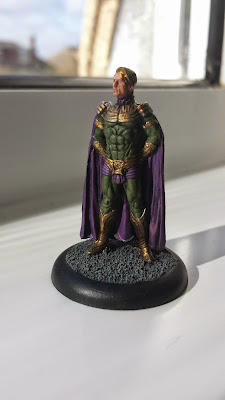 I loved the Watchmen film and comic so I thought I'd start off with them as a gang! And above is my first model, Ozymandias! Really enjoyed painting this and think I've made a decent job of it. I also have Rorschach but when I started to paint him I realised the brown I wanted to use had dried out...
Nite Owl is on his way to me and the final pair will be purchased when the models I have are finished. Then the dilemma of who to do next!
Posted by Anomander at 02:31 7 comments:

Greetings! Between work and the continuing decaration of the house I managed to get a fair bit of painting done! We've also managed to get in a handfull of games and are now starting to get the hang of the mechanics of the game and how our individual armies work.

Both Mike and I have expanded our forces beyond the starter set and as expected this has only added to the game beyond its basic level. That and I keep winning! So, onto what I've painted to date: 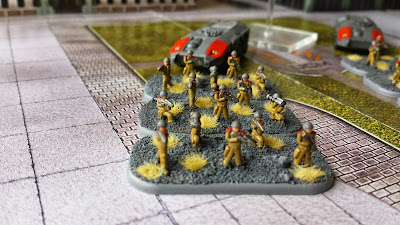 Infantry! And their Bear APC transport. These are the least good models our of the starter set, being quite flat, but they look ok. I got these out of the way quite quickly as I so love painting infantry... These troops are also quite vital in the game, as the missions we have played so far call for searching buildings for objectives and intel, and infantry is the only way to do it. 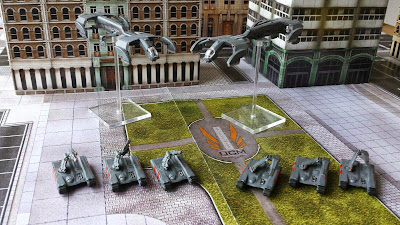 Tanks! On the left Rapier AA tanks, and on the right anti-tank tanks, with their Condor dropships in the background. I've got for a grey military look, with the red panel markings thrown in for a bit of contrast. I also picked a fairly basic paint scheme as I didn't want painting the army to turn into a boring slog! 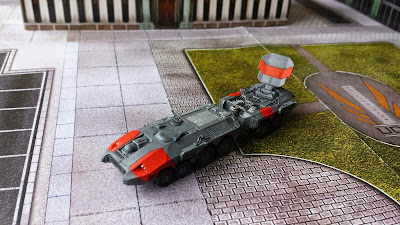 Commander! In his Kodiak! This is the first addition I bought. Commanders add command cards to the game which are an fun way of annoying your opponent! He also comes with a Tactical Orbital Strike, which is nice... 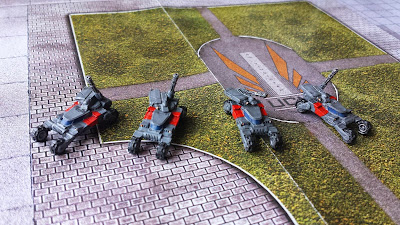 Scouts! Wolverines! These are fast units that come with 2 different turret options, so they can either be AA, or have missile pods and pack a bit of punch against armour. They can also act as spotter for the commanders TOS. 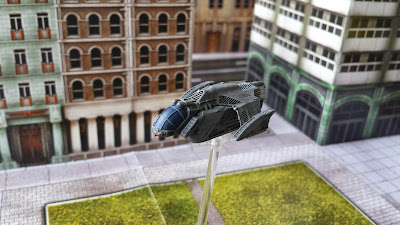 Small dropship! Raven A, which I added with some more elite infantry called Praetorians, but I haven't painted these yet so you'll have to wait and see!

All in I'm glad I started this new game, have enjoyed playing it and the more we build our forces the more it adds to the game. Not sure what to add yet. Mike has quite a mobile army so some more AA would help, but with Wes buying the PHR starter set I may wait and see how my stuff works against his before deciding.

I've also discovered a Batman miniatures game which no one I know has ever mentioned at all. Ever. Especially not Kieron. And to weird it up a bit, the first model I've ordered is Ozymandias, one of the Watchmen! I'm still a bit miffed that the rulebook is £35 but a localish workgames shop does a decent discount so should be able to pick it up for around £28.
Posted by Anomander at 04:20 2 comments: