Its been a while since my last post. No excuses really! Feverish painting continued and then apathy once again set in...

First up is my British FOW infantry. Have now managed to paint a whole rifle platoon! Woo hoo! Its almost a legal army.... Only a few more stands and it will be. But here it is: 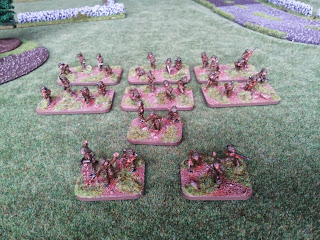 So, thats the platoon in the background with my 1ic and 2ic in front. Still enjoying painting these so hopefully won't be long before the other platoon is done and I can get a game in with them.

Next off the paint line was more Bolt Action Germans. Have now passed my 500 point target with these as you can see below: 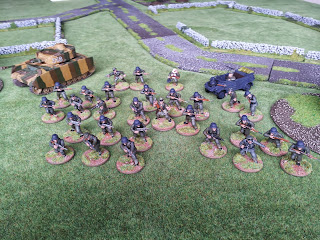 A nice number of troops with a good variety of weapons. However, saying that, I am still to win a game! I think I've lost 3 or 4 times to Matt and then drawn twice against Kieron. I am learning however! Haven't got to use the Panzer IV yet as its a few too many points for the 500 point games we've been playing. Really enjoy playing the game though and we seem to be getting faster at it as we managed to fit 2 games in last night. First was a draw between Kieron and I and then a draw between Kieron and Matt.

Since my last post Derby World occured and I managed to come away £150 lighter.... Was happy with everything I came away with this time as I took a leaf from the other halfs book and wrote myself a list! For my FOW I bought a Hurricaine for some British air support and another couple of BA10's for my Soviets.

Bolt Action was my main spend though. Mainly on terrain as I can away with £85 worth of 4ground houses as seen below: 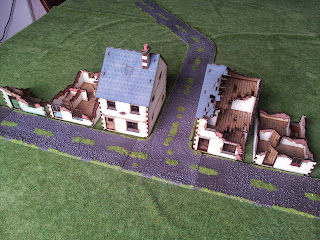 These are the pre-painted ones and they are fantastic for the price! Thought it might take me a while to build them but once I'd started I couldn't stop and got them all done in a day. I did end up covered in glue with orange finger tips from the mdf but it was worth it! Going to get a few more of these now I've seen how much of my 6'x4' table they cover. My other BA purchases was the Panzer IV above and an MMG team which will be the next thing off the paint table.

Also bougth some BA orders dice for Kieron and myself. We both really like the special dice, like these and the Saga dice. However, Matt "Tightwad" Von Crankypants doesn't share the love so Kieron had the idea of us doing secret Santa, so he will end up with some. Its his own fault if he ends up with some poo brown coloured dice though....

Lastly, Xyston were at the event and I managed to pick up some lovely models which will eventually be my Carthaginian baggage marker.

Overall I was happy with my purchases but felt that there were a few traders who weren't there that I would have expected. But then I had a nice bacon sandwich so it all evens out in the end!
Posted by Anomander at 05:40 4 comments: