I am still alive!

Just not had much chance to do a great deal of painting recently, due to holiday, work and general apathy!

Even the 1 model I have managed to paint recently hasn't been photographed so you'll have to use your imagination. Basically, its a German NCO with a submachine gun for my Bolt Action army.

Currently on my painting table, which I will continue to paint this afternoon whilst listening to the footy (Up the Millers!), are a base of my Carthaginian infantry. Had painted one of the models a couple of months ago as a test for the paint scheme I want. I always do this to ensure I don't get halfway through an army and decide that the main paint scheme I've chosen looks crap or is a right pain in the arse to do!

Once question I do have on the painting from is regarding paint brushes. Which brushes do most people use? Any you can recommend? I currently use Galeria brushes from Winsor and Newton after getting annoyed with GW brushes shedding more hair than both my cats put together. The only problem I find is the end of the bristles tend to curl. I'm not sure if this is something I'm doing wrong or if its the brushes.

I have managed a game since returning from holiday, this was for our flames of war campaign and was with my Germans against Matts Americans. Or "Cheaty 40K Sherman Tank" Americans. Matt was using a list from one of the newer really really really late war books. You know, from 1983, with massive Shermans covered in freakin lasers and foot thick adamantium armour. Not that I'm complaining or anything... I'm sure you can tell he won. Once again though I realise the errors I made during the game. Turning up was the first! Second was steaming across the table with a squad of Panzers at a time, as they arrived from reserve, rather than hanging back waiting for more to turn up and then advancing. My inablilty to sucessfully roll any moral checks with Matt passing his didn't help either!

Have ordered a few more bits this month to add to my terrain supply. As Kieron has now selishly moved house and taken his woods with him I managed to find some cheap trees on ebay. They are a bit green but I may try giving them some kind of brown wash to sort that out. They also need a bit of flock on the base nad some highlighting on the base so that will be done at some point. Not bad though, 17 trees for about £15! Also ordered the "Battlefield in a box" ponds. Managed to find a doormat for £7 which will be cut into pieces and used as corn fields. 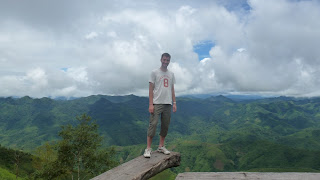 I leave you with this picture of me looking manly in Laos. Lovely country, highly recommend visiting if you get a chance. Take an umbrella though.