Well, 2 actually! The first to my own thumb for healing and allowing me to paint again! Hurrah!

The second, to Andy over at Loki's Great Hall for giving my blog a shout out and more than doubling my followers in 24 hours! Cheers dude!

As a result of this, and because its too bloody hot to do much else, I've taken some pictures of the majority of my painted models. Another reason is that i've never seen all my Soviet flames of war army all out at the same time! So here it is: 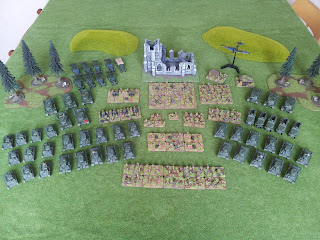 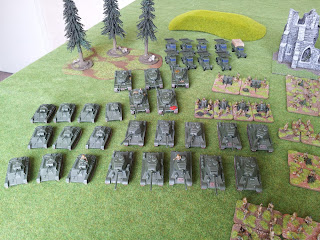 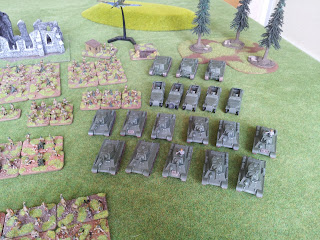 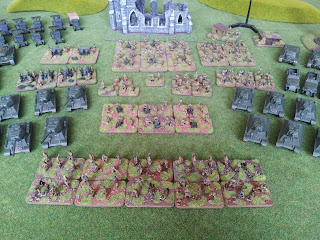 I think in a late war game I can muster nearly 4000 points. I think we may need a larger gaming table to play a game of that size on though! I run on 2 basic rules for this army.

1. You can never have too many tanks.
2. Ignore what Kieron says about infantry.

My second flames of war army is my early/mid war German force which can be used in a late war game if you don't mind a Panzer IV D being used as a Panzer 4 IV H... 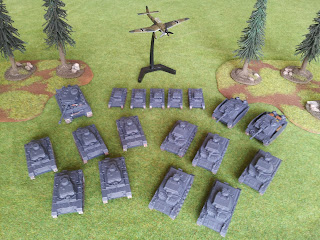 Its mostly Zvezda plastics so didn't cost much at all and gives me a second army to use.

Change of gaming system now and here are my Saga Vikings: 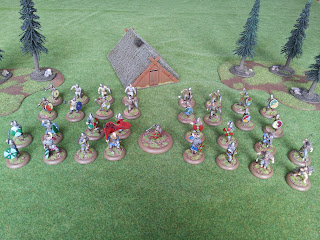 This was my first post "I hate Games Workshop" army I started. Really enjoy this game and will do a second warband for it at some point as I loved painted these and its a good game if you don't have alot of time to spare or a few of you want a massive brawl!

As you know I have just started some 28mm Germans for Bolt Action and these are coming along nicely. Matt and I played another couple of games the other night, managing to stretch our forces to about 450 points. I lost one and we drew the other but again it was alot of fun! As a result of Matt taking a sniper, I realised that for 50 points they were quite handy to have, so I painted one and a spotter! Also painted my medic, who was rather harshly, and against the Geneva Convention, taken out by Matts sniper... 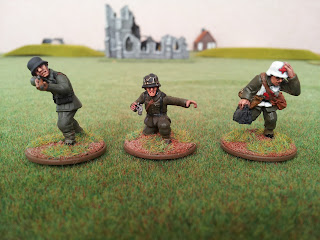 Since playing a few games we realised that its mostly about grabbing objectives, as it was in real life. As a result you really do need a mobile force if you are the attacker. With this in mind I am awaiting delivery of a Kubelwagon! Only 21 points on its own but you can add a medium machine gun to it for 15 points more. Should give us an idea of how vehicles work in the game as well.

My last bit of painting is a base of Numidian Light Cavalry for my Impetus Carthaginians: 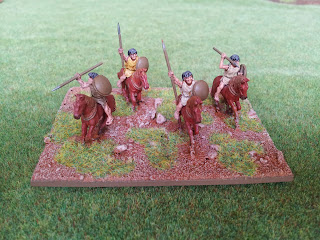 Not sure I'll get much painting done for the next month as I'm off to Vietnam, Laos and Thailand for my holiday!

Once again, hello and thanks to all you new followers for having a look and commenting. It really does help to spurr me on to paint more stuff.

Bolt Action that is! Matt and I  finally had our opening game last night, but more of that later!

First up, I haven't managed to do anywhere near as much painting as I'd have liked recently due to the following: 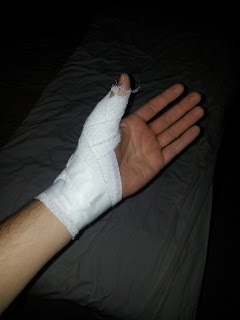 Thats right, I managed to sprain the ligaments in my thumb! So, how did I manage to do it? I'm sure you've all seen at least one of the Mission Impossible films, well it was nothing like any of those... I did it gardening. Nothing heroic, just pulling out bramble roots! So even with a fortnight off work I wasn't able to paint anything for the first week as I couldn't grip anything with my left hand. Its still strapped up but is getting back to normal so have managed a bit of painting.

Painting 15mm models however was probably out of the question so concentrated on my 28mm Germans. 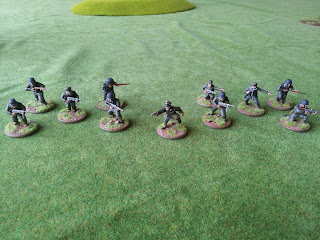 So now I have a legal German force for Bolt Action! Weighing in at a colossal 214 points! I really do like the Warlord plastics though. Lots of options, fit together well and you get a good number of well sculpted models for the money.

So, on to our first game. We played with 300 points a side, boosting what I have painted with unpainted models. Matt came with a Russian force. I thought I might be a bit screwed from the start in such a small game as the Russians get a free 10 man squad as one of their special rules.

However, it wasn't that which really decided the game! I knew I was truly boned when we randomly selected the mission - Point Defence - which gave Matt as the attacker a Preparatory Bombardment before we've even loaded our shiny new guns! As a result both my commander and the medic I had in my force were blown to pieces and the rest of my force was pinned down.... Awesome.

Still managed to enjoy the game though, which Matt won by capturing the objective. Think we managed to play the majority of the rules correctly with a post game rulebook read resulting in only a few important things we missed. I really like the game mechanics and it flows well without being too simple or getting bogged down.

As a result of this game and wanting to boost up the points value of my force I've ordered a Tiger II which comes in at 555 points.*

We also managed to fit in a game of Impetus. Again, 300 points a side with Matts Romans against my Carthaginians. As I haven't managed any painting I simply PVU glued a model to the bases I would be using to represent the units I intend on having. I know this doesn't look good but it means I can plan my force in finer detail, rather than painting it all then realising I need to change stuff.

Again, I lost, but I did learn alot! Gallic warriors are going to be better in big units, as are my elite Lybian infantry. Elephants should just charge straight up the middle! And don't but heavy cavalry behind light cavalry if you aren't going to move the light cavalry out of the way!

Anyway, its all good fun! Strapping should be coming off my thumb this weekend so hopefully should be up and running again on the painting front! Hurrah!