I've finally painted something! Yay! I haven't taken a picture though.

Finished another stand of Russian flames of war infantry and also the 4 remaining stands of Maksim HMG's. This means I only have the PTRD anti-tank rifles left to paint from the PSC heavy weapons set. Not sure when I will do these but I'm sure they will be done at some point.

Gaming wise we decided not to play the Tank Aces thing for now. The first game on my 6'x4' board was christened playing Kieron at FOW. 1750 points of late war Russians against his Panzergrenadiers. He only took 3 Panthers this time but the "Panther Bastard" monica still applies.... He did however, manage to stretch his award winning losing streak out for another game as I managed to beat him. You can read all about it on his blog!

The seconds game was the start to our Firestorm: Lorraine campaign. I played Matt using my Germans against his Americans. Now my Germans are modelled and painted for early and mid-war, but as we're not the finicky about the fine details, Panzer 4's are still Panzer 4's etc Using most of my tanks, 3 of Panther Bastards Panthers and some of his infantry, we managed to make up to 2000 points. I didn't think think was going to go well at all as Matt had more tanks than should be legal to put on a gaming table. And I'm saying that usually being of the good end of a Tankovy force! However, Matt being rubbish at rolling dice and a tactical masterclass from myself meant the Germans won and the Yanks first push was stalled. Again you can read all about this on Kierons blog! One thing we all learnt from this game is that Panzer 3 and 4's don't suck as much we thought they did.

Next up was my first trip to Triples. There seemed to be more to see here than at the York event but as Matt points out, this may be because its all mostly in 1 room. I did buy the worlds most depressing cheese burger for £1.90. On the plus side I managed to find more stuff that I didn't necessarily go to buy. 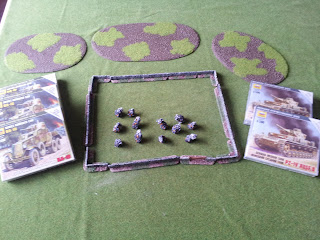 The above shows my purchases! 3 BA-10's for my Russians provides a small cheap unit. Another 2 Panzer 4's to add to my Germans. The top splodges will eventually be bases for trees, when I manage to find some trees that I'm happy with. There were some nice trees there but they didn't look like they'd stand up to much hammer. The wall is perfect for 15mm and all the bits only came to £10. Bargain! Within the walls are 12 very nice flame and smoke markers for all the tanks I lose in FOW... Again all these were under £10. Another bargain!

I did go with the intention of buying Dead Mans Hand, as JP showed me how the game works a few nights ago. Really enjoyed the game and I will be buying it but it would have taken all the cash I had on me and I can easily buy it from home and it won't cost me any more.

All in all I'm very happy with my haul! After this we headed to mine to play a boardgame I have called Level 7. We have played this through in its entirety, but it turns out the rulebook is so badly laid out that we'd only being playing a light version of the rules... However, Matt and Wes have researched this in depth and came up with some sanity sheets with more comprehensive rules. Its much harder playing it with all the rules but also a much better game! Goes to show a shitty rulebook can spoil a game completely!

After this as part of our attempt to integrate Wes into the world of wargames we showed him an example game of Saga. Using just 4 points and not getting too complicated it showed perfectly how the game works and also how much Matt sucks at it!