Woo hoo! Discussions were had, models were researched and then a test game was had. After all this I decided my next project would be a 15mm Carthaginian army for Impetus.

However, before all this was decided upon I managed to finish my first Bolt Action German infantry squad! Hurrah! Another 5 man squad and a commander and I'll have a legal army... 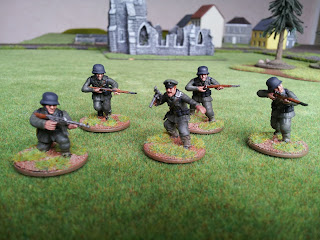 Matt that I regularly game with already has a Roman army, so it seemed like a good plan to create an army based around one of there earliest and deadliest foes. The Carthaginians under Hannibal weren't far off destroying the early Roman empire before he decided to put his feet up a bit and the Romans finally pulled there fingers out and went about taking over the whole entire universe.

I decided to start with to buy the options from the Basic Impetus list for this era. This gave me a nice sized starting army which on further research comes to about 300 points in a normal impetus game. Model research showed that Xyston miniatures were the best looking models I could find. 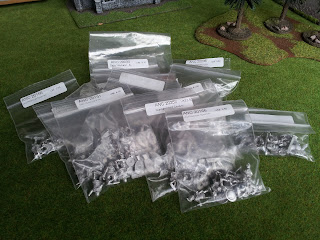 And here it all is in its shiny bagged up glory! As I'm sure Kieron will tell you I have 15mm infantry coming out of my ears, so the prospect of painting all this was a bit daunting at first. However, with the quality of the Xyston miniatures means they are a pleasure to paint. Good job really! All this roughly comes to 10 bases of models, with a mix of infantry, skirmishers, cavalry and an elephant! So enough variety that it won't get boring.

I have painted 2 units so far, the first being some Gallic infantry: 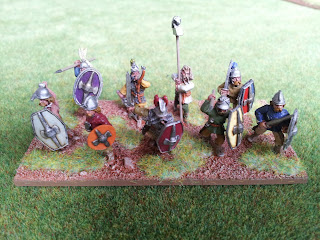 And the second being some Numidian skirmishers with javelins: 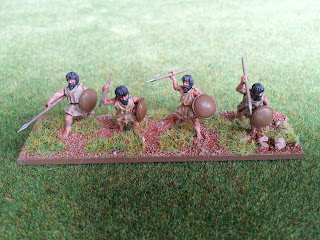 Drilling out the hands which the javelins are wielded with is nervous work, but went quite well with me taking my time. I need to purchase some bronze coloured paint before I can start my main infantry units and also some chesnut brown type colour paint for the cavalry.

I think its only fair to mention the intro game of Impetus that Matt and I had. Long story short, I won. I might even retire undefeated from the world of Impetus and just paint my Carthaginians as a trophy to myself...

A further 2 games of FOW have been had recently as well.  Both resulting in defeats for myself. The first with my Germans against Matts Yanks. I mainly lost this one due to over confidence and not going for the objective early enough. Bloody rules! The second being against a hybrid Kiermatt joint gang up, pitching my Germans against Kierons Americans led by Kiermatt... That and the fact that the Americans had started using proper ammo and manufacturing M10's that were clearly made of adamantium.

So, plans for now are to continue with my new project and to intersperse this with more Bolt Action Germans to break it up a bit. Mainly so I don't get bored, and also so I don't go blind painting 15mm models...
Posted by Anomander at 11:02